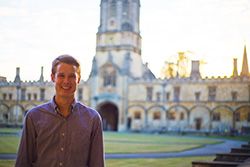 Mike Norton has traveled far from his roots as a rural Arkansas farm boy. The 2013 Honors College graduate spent a gap year in Washington, D.C., serving a rural policy internship with the White House Domestic Policy Council and interning with Congressman David Valadao and with the Delta Regional Authority. He is now studying as a Marshall Scholar at the University of Oxford, pursuing a master’s degree in politics with an emphasis in comparative government.

Mike plans to combine both interests in a future career, seeking private sector experience in some aspect of agriculture, nutrition or food policy before moving into public service. He is deeply concerned with the dwindling rural population in the U.S. His work for the Domestic Policy Council and the Delta Regional Authority included developing economic incentives for small businesses.

Mike grew up on a poultry and beef farm in rural Washington County. As state president of the Arkansas FFA, he planned to go into food science as a career. Once he got to the university, he realized that life in the laboratory was not for him. Faculty mentor Lanier Nalley, whom Mike met in his sophomore year, steered the people-oriented student toward agricultural economics. Mike spent the next summer in Ghana, interning at the World Cocoa Foundation. His honors thesis on “Cost-Benefit Analysis of Farmer Training in Ghanaian Cocoa Farming” was published in the Journal of International Agricultural Trade and Development.

Mike was awarded the prestigious Harry S. Truman Scholarship, the first for Bumpers College, in his junior year. The national award is given to students committed to public service. Mike’s work on and off campus set him apart as an agent of change. He served as Bumpers College representative and senate chairman for the Associated Student Government, was a Presidential Fellow with the Center for the Study of the Presidency and Congress in Washington, D.C., and spent a summer studying abroad at the London School of Economics and Political Science.

The Honors College opened doors to all those experiences, Mike said. Each built on the next, culminating in his White House internship and the Marshall Scholarship to Oxford. The one-on-one relationships with Nalley and Suzanne McCray, who heads the Office of Nationally Competitive Awards, were invaluable to him, he said. So was the opportunity to travel to Ghana for research, made possible by a SURF (Statewide Undergraduate Research Fellowship) grant.