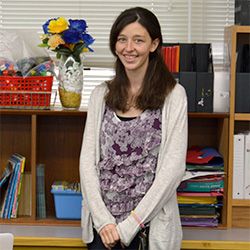 As an Honors College student, Trish Lopez majored in Spanish because she thought it would be practical. An extra credit assignment took her into a local elementary school with a high percentage of Latino kids, and Trish knew she’d found her calling.

In Springdale, where she now teaches, the Latino population increased by 173 percent between 2000 and 2010, according to U.S. Census data. Trish’s bilingual ability allows her to help children bridge the two languages for optimal learning.

Trish has worked with several age groups at Elmdale Elementary, where the Latino student population is nearly 70 percent. She started teaching at the kindergarten level, when being able to speak Spanish with new students was an extremely helpful skill to have.

By the time they get to fifth grade, the grade Trish now teaches, most non-native speakers are fluent in English. Yet Spanish still helps them make connections with unfamiliar words. When teaching about quadrilaterals, for example, Trish reminds her class that “cuadrado” means square. Pupils grasp the concept in a way they wouldn’t without hearing the Spanish cognate, she said.

Speaking Spanish also allows her to communicate with parents, who in turn feel more comfortable with the teacher-parent relationship, she said. The self-described language learning “nerd” is fascinated by the way thoughts are communicated through language. For her honors thesis, she worked one-on-one with Latino pupils at another elementary school, teaching them bilingually in math. She learned that it’s not always best to introduce new concepts in their native language. “That was a good lesson. You can’t always assume that what you think is going to be helpful, will be.”

Trish built on her honors thesis in her master’s research project, which explored the benefits of teaching science vocabulary before starting on concepts. That’s helpful for all students, she said, but particularly for non-native English speakers who have never been exposed to the words.

Her biggest surprise as a teacher is realizing how out-of-school issues such as family problems and food insecurity affect what goes on in the classroom. “It’s not all about the academics. There are a lot of behavioral or caring aspects to the job that are important, too. You have to look at the whole child. The academic stuff is only going to come when they’re cared for.”

Update: Trish is now a research associate at the University of Arkansas.