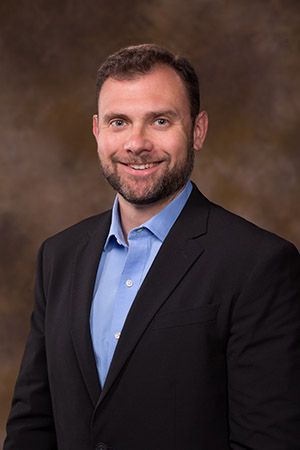 Bret Schulte, associate professor of journalism in the School of Journalism and Strategic Media, J. William Fulbright College of Arts and Sciences.

Bret Schulte has worked with honors students since 2010, when he resurrected the honors colloquium Literature of Journalism. The course, a seminar on reportorial narrative nonfiction from the mid-20th century to today, has drawn students from biology to computer science to finance, including Bodenhamer and Truman fellows.

Later that year, he worked with an honors journalism student and the Office of Student Media to create the Hill Magazine, which has since won numerous regional and national awards. He has served on several honors theses committees and as an interviewer for Honors College fellowships. In 2016, he coordinated a Skype discussion on politics and the media between Honors College students and Slate editor Chad Lorenz. In part because of his work with honors students, Schulte was awarded 2010 Teacher of the Year by Associated Student Government and was nominated again in 2014.

In 2012, Schulte and his wife, Stephanie, took over as chaperones for incoming Bodenhamer Fellows on their annual summer trip to Washington, D.C., and later, New York City. Organized through the Honors College, the week-long trip is an opportunity for the winners of the prestigious fellowship to explore a major city, while forming bonds of friendship that will serve them through their academic careers and beyond. Bret chaperoned for six years, using his media contacts to get students into the newsrooms of The Washington Post, CNN, and National Geographic to talk with prominent editors and reporters.