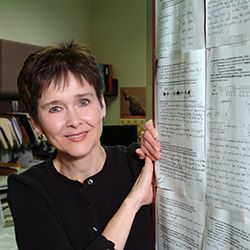 My favorite thing about working with honors students is … You can sit down and toss around ideas and pursue a fresh look at things. They don’t have the base knowledge of a Ph.D. student but they’re asking exactly the right questions – that part I just love.

If I weren’t teaching, I would be … I can’t see myself doing anything else.  Of course there’s research – but to me, research is also a wonderful teaching tool. I really enjoy the student interaction.

Something most people don’t know about me is … growing up in Germany, I competed in voltigieren, which involves doing gymnastics on horseback.

“The most exciting thing to me about agricultural research is the opportunity to do something fundamental and problem solving at the same time,” said Gisela Erf, holder of the Tyson Endowed Professorship in Avian Immunology. Erf has a stellar record in tackling tough problems through animal research: by studying chickens, she has made major progress towards understanding vitiligo, an incurable autoimmune problem that causes people to lose their skin pigmentation. In the future, treatments such as topical creams and nutritional therapies may be used to combat this disfiguring condition thanks in part to Erf and her students, who have definitively established that genetics, the immune system, and environmental triggers all play a role.

“Vitiligo tends to be dismissed as a cosmetic disease, but it’s much more than that,” Erf said. “People with vitiligo are susceptible to other autoimmune diseases and skin cancer, and the psychological impact – you can just imagine it,” she said, gesturing at a magazine photo of a young girl with a severe case.

Over more than 20 years of research, Erf has established the Smyth line of chickens, which has an 85 – 95% incidence of vitiligo, as the best animal model for studying the mechanisms that govern this disease. “We can track the entire course of the disease over 20 weeks,” she said.  Because the disease appears in the feathers, tissue collection is minimally invasive, which makes it easier to involve undergraduate students in hands-on research. Honors student Kristen Byrne, for example, is studying the role of the innate immune system, the body’s first line of defense against attack. Her findings may help identify biomarkers for the disease. Another honors student, Jordan Sorrick, is focusing on the destruction of pigment cells in the eye that occurs in some Smyth line chickens. “Because the immune system begins destroying pigment in the eye before the feather, Jordan’s work could contribute to our understanding of the initial autoimmune response that triggers the disease,” Erf said.

Erf relishes the flexibility that undergraduate research offers. “I’m so locked in to meeting the demands of research funding, and my graduate students generally have to work towards those same goals,” she said. “Undergraduate students can come in and play!  Their results may be on the small scale, but often these projects provide preliminary data for research grant applications.”