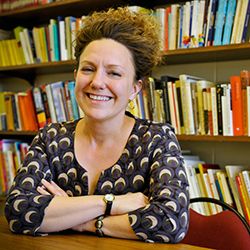 The most important thing I learned in school was ... a little bit of failure can be constructive.  I was a freshman biology major and struggling in theoretical honors calculus, but that led to me changing my major to German. Students should take some risks and study a wide variety of fields, even though it might not seem to fit neatly into their life plans.

My favorite thing about working with honors students is ... everything. Honors students bring a wide variety of interests, experiences, and opinions to the table, and it is a real pleasure having conversations with them both in and outside of the classroom.

Something most people don't know about me is ... I didn't start learning German until I was 18 years old; I'm learning Korean now since my kids are Korean.

If I weren't teaching, I would be ... depressed. I love teaching. However, if we're presupposing I won the lottery, I'd say I would be traveling the world with my family and eating as much delicious food as possible.

“I'm known for being a bit of an unconventional teacher,” says Kathleen Condray, associate professor of German and head of the university’s German program. Her students have restaged a German novella as the Jerry Springer show, hiked through Devil’s Den to learn about the tools that 19th century German adventurer Friedrich Gerstaecker would have used during his stays in Arkansas, and celebrated the end of the semester with her culinary specialty— Schwarzwälderkirschtorte, or Black Forest cherry torte.

Currently, Condray is researching immigrant autobiography and multicultural experiences in Germany. She explained that Germans of mixed ethnicity, such as Turkish-Germans or Afro-Germans, face unique challenges. In contrast to this country, where people of different ethnicities are all considered Americans, Germans sometimes have trouble considering people with an immigrant background as German, even if they are citizens who have lived in that country all their lives. For example, Afro-Germans are sometimes complimented on their ability to speak German, their native language.

To answer the "What can I do with that?" question frequently heard by language professors, Condray also blogs about real-life professionals who use German in their careers.

Some of Condray’s honors students are conducting research in this field as well. One of her students used funding from a SURF grant to examine ethnicity and language use in the films of Turkish-German director Fatih Akin. Other students are looking at Germany’s past, studying the White Rose, a student group that opposed the Third Reich, and analyzing the writings of a German pastor who was so outraged by Hitler’s atrocities that he gave up his pacifist philosophy to participate in a plot against the dictator.

Condray is proud of the university’s honors students, and she emphasizes that students here get an education comparable to that of institutions such as Harvard or Yale. “This is evidenced by the number of national and international awards they win,” she explained, pointing to the many Fulbright scholars from the Honors College and recipients of the internationally competitive Research in Science and Engineering Fellowship, which allows students to conduct paid summer research in German doctoral laboratories.