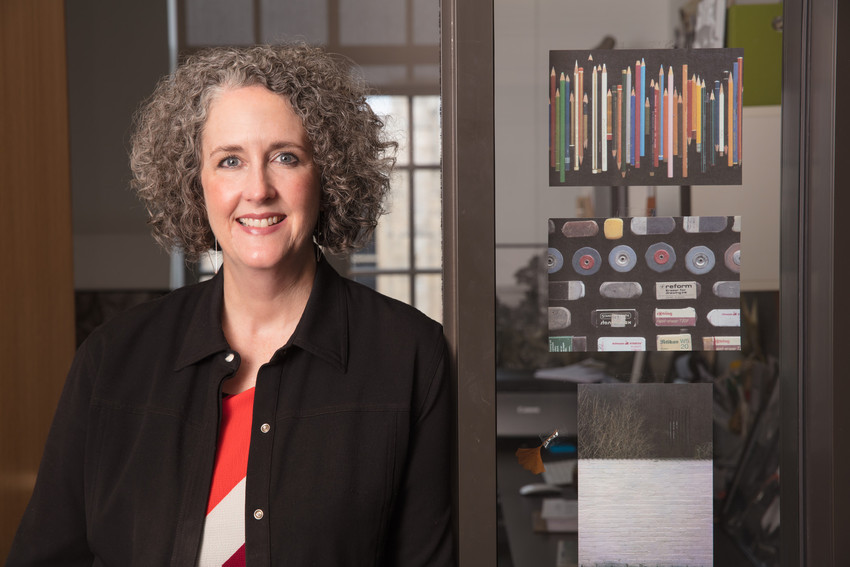 My favorite thing about working with honors students is … the struggle. Seeing them struggle and then come out on the other side.

Something most people don’t know about me is … I secretly want to be an FBI agent.

The most interesting object I have in my office is … a compilation of “Laura Terry’s Greatest Hits,” quotes written down by [honors student] Callie Fleetwood during my class. That’s pretty special.

One thing you can always find in my fridge is … cheese. I love it all, especially Parmesan!

On the weekends, you’ll find me … either drawing, or out in the woods with my husband and dog.

For Laura Terry, her paintings and drawings have  always been about the landscape.  All her life she has been fascinated by the structure of the land, and her most recent work consists of a series of drawings and prints offering what she calls a “macro/micro perspective” of the landscape. The work focuses on the horizontal lines formed by the stratifications of the earth. Terry is particularly sensitive to the “subtle changes in topography, where colors and textures meet,” which are represented in her paintings by the blending of layer onto layer, from close-ups of rock formations to distant portraits of the horizon.

Terry’s academic and creative life has always been a mélange of art and architecture: “I don’t paint the way someone educated purely as a painter would,” she says, noting that in much of her work she has instinctively “architecturalized” the landscape. She learned to draw in architecture school, but after some encouragement from a professor and a study abroad trip to Italy, she was persuaded to pursue art, and went on to obtain an MFA in painting at the Savannah College of Art and Design.

“What I learn from painting,” Terry says, “I transfer into my teaching; students learn from me and I learn from their experiences … They fill me up with their enthusiasm.” And the feeling is mutual: she cites one class’s group project in which each student traveled to the Prairie Grove Battlefield, unbeknownst to Terry, to draw a portrait of a particular tree that she had been studying for a project. During one of Terry’s own surveys of the tree her purse had been stolen, along with months of precious notes. The students then combined all their drawing into panels and gave them to Terry as a gift.

Terry’s approach to teaching is characterized by “blurring the lines between art and architecture,” and the honors theses she supervises are representative of this aesthetic. Erin Hunter, for example, an architecture student with a minor in set design, developed a thesis around her role as co-designer of the American Idiot set for the on-campus production of the play. Another student chose to examine the spatial ideal by tracing a video of modern dance to create 3D models of the resulting movements. Still another student, Callie Fleetwood, is researching how the paintings of two artist-architects, Le Corbusier and Alvar Aalto, complemented their architectural work. Fleetwood is setting out to prove her theories on these artists’ works through drawings of her own.

Fleetwood’s artists/architects, Terry notes, had many creative outlets: painting, building furniture, exploring tableware and vases. And everything they did recalled their architectural methods. Similarly, Terry encourages her students to derive a new approach to their own studies through visual art. “You learn by doing, you learn by making,” she says. “That’s where I see all of my worlds colliding. And what I learn myself from painting, I translate into my teaching, which my students then learn from me. It all keeps cycling.”