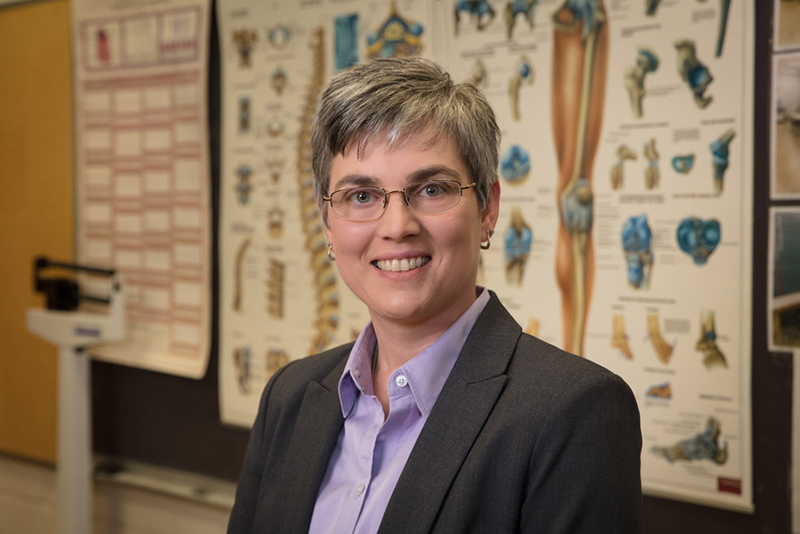 In her own words…

My favorite thing about honors students is…their passion and drive. Once you match a student up with their passion, the sky’s the limit for what they can do.

My preferred method of exercise is…cycling. I run during the winter, but in the summer I start out cycling about 100 miles a week, and finish the season cycling 300, give or take.

Something most people don’t know about me is…I grew up on a farm! We raised cows and horses in Tennessee.

Crabby. Mean. Wise. When Dr. Michelle Gray asks for adjectives that students associate with older adults in her “Exercise Applications for Special Populations” course, these are generally among the first words she hears. “Wise” is usually the only positive descriptor proffered by her students in any given semester. This phenomenon is a manifestation of ageism, a topic Gray is always sure to integrate into her teaching.

Early in her career, Gray researched the effects of resistance training on bone density in middle-aged women. Underwhelmed by the outcomes of her studies, she began a collaboration with a colleague who was interested in older populations. Gray was heartened by the process. “With a small amount of stimulus you can effect a large change in older adults,” she says. Since coming to the University of Arkansas in 2010, her interest has evolved to focus more on the “functional fitness” of older adults – the ability to do everyday tasks like cooking, going to the store and even getting out of bed. The most effective exercise for improving functional fitness in older adults? Gray doesn’t hesitate: “Resistance training by far,” she says. And it’s not enough to start lifting once you hit 65; Gray says it’s important to start strength exercises in middle age. “We need to start early and maintain our muscle mass and physical strength throughout the rest of our lives.”

Gray has supervised 29 honors theses since 2010, and has passed on this interest in older populations to many of her students. “I really like to work with honors students,” she says, lauding them for the ownership they take over their work.  “They’re committed – I can give them a project and let them run with it.” She cites senior Kelly Allen, whose thesis research on ageism involved running fitness tests on participants strapped into an aging suit. Gray gives Allen all the credit: “that was her project,” she emphasizes. Lauren Wethington Clausing, another honors student, found that the supplement citrulline-malate had a positive impact on muscle endurance in young resistance-trained women; her honors thesis research has been published in Inquiry and the European Journal of Nutrition.

In Spring 2019, Gray will lead an Honors College Signature Seminar entitled “Aging,” in which students will discuss the social and economic impacts of the approaching “Silver Tsunami,” as Baby Boomers enter their senior years. Through the course, she hopes to alter negative attitudes toward older adults and to make students more aware of the realities of aging.