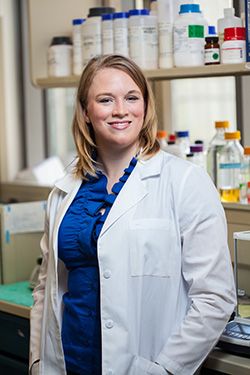 Efficiency. That’s the key to any business enterprise, said Dr. Ellen Brune, a 2009 Honors College graduate and founder of Boston Mountain Biotech. Ellen started the company to promote a technology she helped invent that simplifies the production of proteins used in drugs that treat cancer, diabetes, macular degeneration, arthritis and other diseases. The new technology improves the purification process of E. coli, a bacteria frequently used to produce therapeutic proteins.

Like all microorganisms used to make protein products, E. coli creates a large amount of waste, Ellen said. That waste must be removed before the protein can be used. Prior to her company’s innovation, the industry focus was on making more selective filters to eradicate the waste after protein production. She and her colleagues looked upstream instead. The Lotus® cell line they’ve developed consists of E. coli cells genetically modified to create less waste.

“At the end of the day, we’re engineers,” said Ellen, who earned a Ph.D. in chemical engineering from the university in 2013. Each E. coli cell functions like a little factory, she explained. Why look downstream for solutions when it is possible to modify the cellular DNA? “Our focus was ‘How do we make that cellular factory more efficient?’”

Ellen began working with engineering professor Bob Beitle on research that led to the development of the new technology as an undergraduate, she said. Several scientists from two universities worked together on the project. Ellen’s contribution, as a graduate student, was organizing the massive amount of data generated in the experimental process. “How do you find what you’re looking for?” she asked. The bioinformatics system she developed provided the blueprints for the Lotus cell line.

Ellen’s four years as an Honors College Fellow helped prepare her for the rigors of her current role, she said. “The Honors College encouraged me that if I put my mind to something, I really can learn that material. I really can be successful.” Her senior design class took part in the Environmental Protection Agency P3 Project, a grant competition for undergraduates that helped Ellen understand the importance of communicating scientific research and development to the public, she said. Opportunities continued during Ellen’s study as a UA Doctoral Academy Fellow. Participation in the entrepreneurship certificate program for non-MBA students led to the creation of Boston Mountain Biotech. The company was awarded a $50,000 NSF-I Corps Program grant that included training in entrepreneurship at Stanford University. Ellen applied skills garnered in both programs to win numerous competitions in business planning and raise another $50,000 for the new company.

Update: Today, the highly prized company is in the process of being sold, and Ellen has joined Walmart as a senior manager, where she focuses on supply chain automation and innovation.