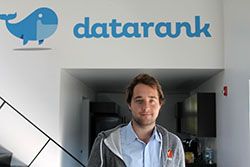 Matt Seubert joined DataRank, a local startup mapping the new world of “social listening,” as an intern in his senior year. The firm collects and analyzes social media conversations relevant to clients’ products and brands.

When clients asked for additional help analyzing the new data, Matt stepped in with customized research. What started as a part-time internship became a full-time job. The 2013 graduate now works as director of client services, helping users access, sort and filter the millions of conversations taking place on Twitter, Facebook, e-commerce sites and blogs.

Matt likens the concept to consumers talking about their latest purchases outside a store, only doing so via social media in a public forum. “It’s the next world of surveys and focus groups,” he said.

DataRank more than doubled its revenue in the six months after Matt was promoted to client services director. Now, just one year after graduating, he has three people working under him — all Honors College graduates. Matt was named one of Northwest Arkansas’ Fast 15 by the Northwest Arkansas Business Journal in 2014. The honor recognizes young professionals “on the fast track to success.”

“It’s definitely been a great growth experience for me — being in a place to take on responsibility for a company’s growth very quickly,” Matt said.

The opportunities available to Matt as an Honors College Fellow were instrumental in shaping his career, he said. He studied at the London School of Economics and Political Science and with Walton College’s Japan Study Abroad Program, where he had the opportunity to meet with the CEO of Wal-Mart Japan. Matt also participated in a community economic development program in Belize. The micro finance program he developed made two business loans, including one to a women’s cooperative that now has an operational restaurant and catering business.

“The Belize program was very much an early affirmation in my college experience that given a good team and the opportunity to build something, I could,” he said.

Matt’s honors thesis grew out of his internship at DataRank. He used social media to track polling predictions for the 2012 presidential election. When he combined social media with traditional polling methods, he was able to accurately predict 50 of 51 jurisdictions. “It’s very interesting to be at the front of this space,” he said. “Social listening is a relatively new thing, and the volume of the conversation is being turned up every day as more people join.”