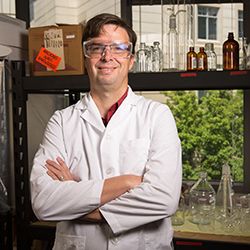 My favorite thing about working with Honors College students is ... they have so much energy and excitement for research!

When I want to relax, I ... spend time with my family. I have a five-year-old daughter, and so I’m doing all sorts of five-year-old things. Last weekend we made about 20 bracelets from beads. We also like to swim in our backyard pool.

Jamie Hestekin’s work with charged membrane separations impacts technologies as diverse as biofuels, artificial lungs and hydraulic fracturing. The membranes function as filters, separating gasses, molecules or other substances from their host materials. The hollow fiber membrane used in the artificial lung removes carbon dioxide and oxygenates blood, for example.

Hestekin enjoys collaborating with industrial partners, energized by the cross-fertilization not found in solo lab research. “If you just get people talking, you come up with better ideas,” he said. He applies the same approach to his work with undergraduates. “Honors College students are very bright,” he said. “I throw them in the deep end without a life jacket and see what they can figure out. Some projects turn into extremely big deals. Some don’t turn out so well, but they’re still experiences.”

Another biofuel project involves algae, which grows quickly but is very wet. Hestekin’s students are working to separate the valuable lipids from the water and address other issues that hinder large-scale production. In 2012, Hestekin and a team of undergraduates were named co-winners of Planet Forward’s Innovator of the Year for the algae-to-butanol project in a contest that aired on public television stations nationwide.

Another area of research focuses on developing technologies to make hydraulic fracturing more efficient. It takes 1 to 5 million gallons of water to frack a well, Hestekin said. Recycling that water or using it to generate energy to power the fracking operation are ways to mitigate the environmental effects. Hailey Dunsworth, another Goldwater Scholar, used a form of reverse electrodialysis to recover energy from water used in fracking. Her work was instrumental for a patent application filed for the process.