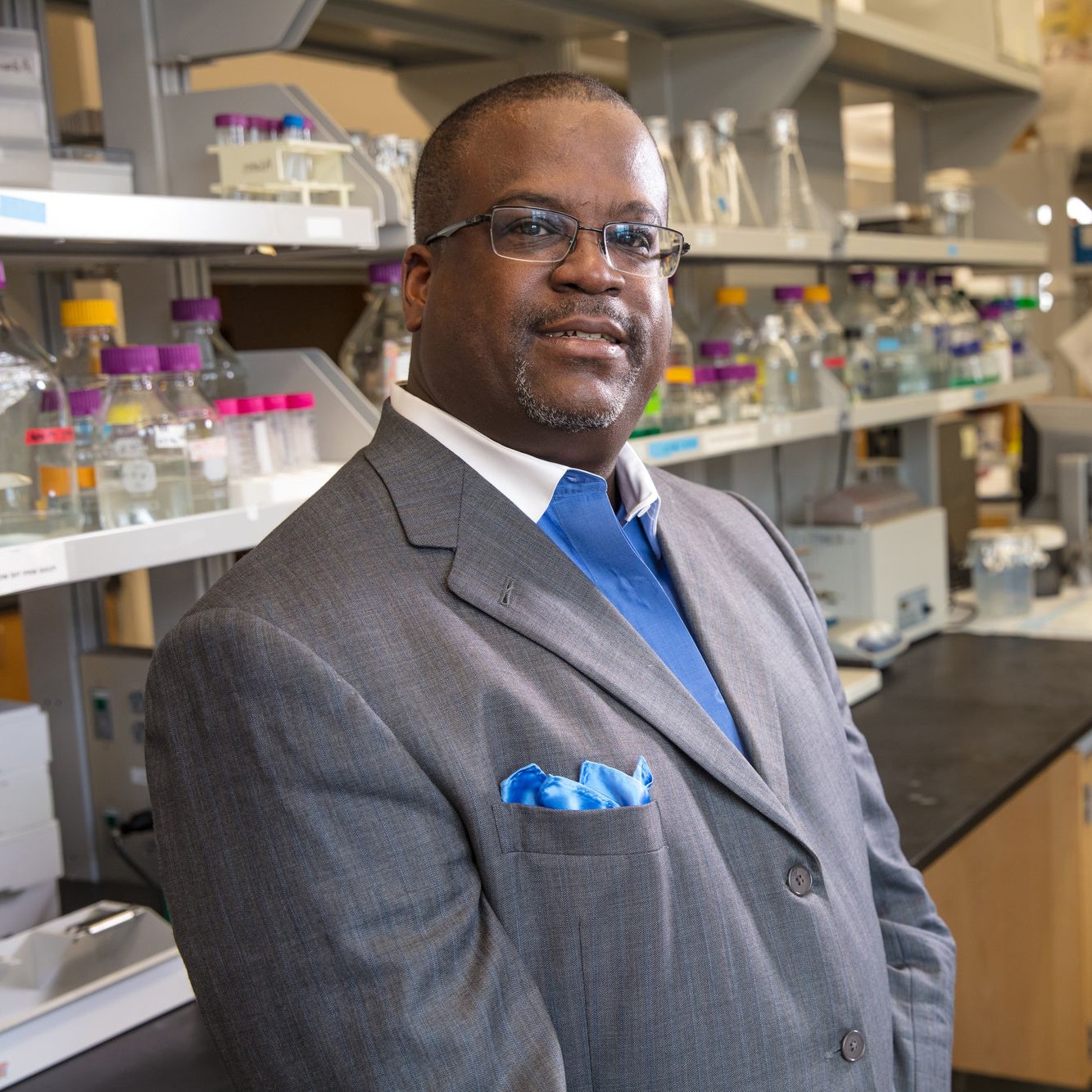 The most important thing I learned in school was … to not let anybody tell me that I couldn’t do what I wanted to do. I had a few very positive mentors.

When I was growing up, I wanted to be … an airline pilot. When you’re a kid, it changes month to month, but that was always a dream for me. Then my family visited Kings Dominion amusement park, and I discovered I have a fear of heights on a roller coaster ride. Now when I fly, I sit on the aisle, and I close the window shade!

Something most people don’t know about me is … that I’m extremely sensitive. Most people find me intimidating because I do not smile a lot. The movie Rudy really broke me up!

My favorite thing about working with honors students is … relishing their innate intelligence, and being able to expose them to more. The textbook is not the issue – it’s moving past it!

Paul Adams played with a chemistry set as a boy, and the walls of his bedroom were papered with periodic charts. But Adams didn’t realize that a research career was an option until he’d completed his first year of medical school. Around that time, his mother passed away after a long struggle with cancer, and he decided to devote his life to combating that disease.

“My mother, and her illness, are a total inspiration to me, and that keeps me going, particularly when things aren’t going well in the lab. You have good times and bad times in the lab,” he said with a ready grin.

Adams studies Ras proteins, which have been identified in nearly one-third of cancer types. He believes that these proteins have unique structural aspects that may play a role in causing cells to continue growing, a hallmark of cancer cells. “We’re working to identify potential small molecule drug targets that would alter the Ras proteins that facilitate abnormal cell growth,” he said. Adams has enjoyed notable success: he held a National Science Foundation Fellowship as a postdoctoral researcher at the department of molecular medicine at Cornell University, and since coming to the university in 2007 he has received more than $1.45 million in funding from the National Science Foundation, the National Institutes of Health, the Arkansas Biosciences Institute and the Winthrop P. Rockefeller Cancer Institute at UAMS.

Adams has mentored more than 50 honors students in the last 10 years, and takes pride in helping them master the critical thought process. “You’ve got to quit looking for the right answer, and use what you know to probe questions that haven’t been asked before,” he said. Adams keeps in touch with his students and is quick to brag on one, Omar Salem, who coauthored a paper in Biochemistry, listed as one of the top 100 most influential journals in biology and medicine in the last 100 years. Salem is now pursuing a Ph.D./M.D. at Harvard Medical School.

Most recently, Adams won a grant from the National Science Foundation that will help him support and mentor Honors College Path students, typically drawn from underrepresented and rural populations in Arkansas, who are interested in pursuing careers in STEM fields. “I look forward to the opportunity to prepare these students, help them choose the appropriate major, and immediately be immersed in research,” he said. "This program fits perfectly with my desire to continue to lift as I climb as an academic professional in a STEM discipline.”

Working in a field where African Americans have been underrepresented, Adams assumes a heavier mantle than most. “If there are not too many who look like you, doing what you do, then you’re in a position where others look to you,” he said. “Everybody needs role models – they make you believe that you can accomplish your goals, too.”