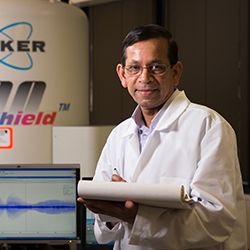 Professor of Chemistry and Biochemistry

Something most people don't know about me is ... I have an obsession for the game of chess.  I spend a lot of my spare time on planning and analyzing new chess moves.  I also like to take long car drives with my wife.

A book that has influenced me is ...The Double Helix, by James Watson.  The book provides an honest personal account of the brilliant scientist who determined the structure of DNA. The book paints a vivid picture of the triumphs and frustrations of people who practice real science. I first read this book when I was in high school and it definitely was most influential in me choosing scientific research as a career path.

I tried to raise my children* to be ... honest and compassionate. [Editor's note: daughters Gaya and Vasu were both Honors College Fellows who are currently continuing their education in medical school.]

My dream for the world is ... one that is peaceful, unpolluted and prosperous.

Suresh Kumar studies the biomolecular interactions that make life possible. He and his research group work to decipher the underlying mechanisms involved in cell growth, cell differentiation and the onset of diseases such as Alzheimer’s, cancer and diabetes. A major project focuses on fibroblast growth factor, or FGF, a protein that plays a crucial role in wound healing. Kumar’s goal is to create new forms of FGF that will remain stable at room temperature, allowing this important protein to reach people in less developed parts of the world. He’s also working to design new anti-fungal, anticoagulant and anticancer drugs.

Honors College students play a key role in Kumar’s research because they are willing to try experiments more seasoned researchers might avoid. A large percentage of research ideas will never pan out, he said. Yet there’s no way to discern the ideas with real promise without doing the experiments. “Progress in research is only possible if you think outside the box,” Kumar said. “Honors College students are extraordinarily bright and completely open to original ideas. They are willing to jump in, take my crazy ideas, and make them happen.”

Honors College student Hannah Duke challenged the prevailing belief that the arrangement of amino acids in a protein can only be read in one direction, for example. She flipped the sequence, demonstrating that the protein has the same function even when reversed. Hannah’s research formed the basis for the design of several new antifungal peptides, which continue to be developed in research groups led by Kumar and David McNabb, associate professor of biological sciences. A patent and several peer-reviewed publications are in process.

Another undergraduate, Emily Crossfield, created peptides that selectively bind to heparin but not to other contaminants, a project with major implications for the manufacture of FGF. Contaminated FGF imported from China resulted in a number of deaths several years ago, prompting the FDA to call for new protocols and methods for purifying the protein. Kumar’s team is building on the patents filed from Emily’s research to purify heparin taken from chickens instead of pigs. This is a potentially cost-saving method for producing FGF in Arkansas.

Most biochemical undergraduates are headed for medical school rather than research careers, Kumar said. Yet their experience in the lab informs their medical understanding. “A doctor is incomplete if he or she is unable to stay in touch with the ever-changing literature,” Kumar said. “I want to be a part of that process, of my students getting the benefit of research, and most importantly, of getting excited about research as an option, whether they go to med school or grad school.”