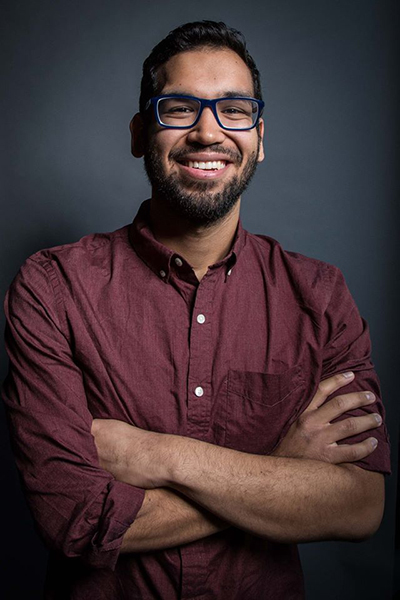 Ariel Romero's honors thesis Welcome to America looks different than most—eight posters and a brochure exploring the plight of undocumented college students. The fine arts/graphic design major selected the topic based on his personal experience.

Ariel moved to Arkansas from Honduras at age 6, after his missionary parents felt called to focus their ministry on the state's growing Latino community.

"I went to elementary school in Prairie Grove, middle school in Farmington, and high school in Fayetteville - America was my home. There was no such thing as 'undocumented' or 'illegal,'" he recalled.

Ariel first became aware of his undocumented status when he had to pass on getting a driver's license at age 16. He graduated as valedictorian of Haas Hall Academy, the state's top-ranked high school, but had trouble enrolling at the University of Arkansas because he had no social security number.

"The older you get, the more obstacles there are in your way," he said.  Ariel's story has been more difficult than most. After his mother, a chaplain at Tyson Foods, died when he was 17, his family experienced homelessness for a time. Ariel "couched it" with friends, borrowed textbooks, and had trouble getting to campus after the family car broke down. Having no laptop ensured many late nights at the studio and in the computer lab. Ariel credits his faith for helping him persevere through tough times.

"At the end of the day, there's always a way to get things done," he said. These hardships encouraged him to share his experience, and that of others. "I thought, 'you know what, maybe I can talk about this.' To me, design needs purpose. I want to address a life issue that affects a lot of people."

Mentored by Marty Maxwell Lane, assistant professor of art, and assisted by Rafael Arciga, senior assistant director of admissions, and Ana Barker, an academic adviser in the Graduate School, Ariel set out to find other undocumented students to interview — no easy task, given that these students must stay in the shadows. He also surveyed 100 students enrolled in political science and government classes about their perceptions of undocumented students, and was dismayed by the feedback he received.

"Some of the comments were pretty harsh, but people don't know, and I can't blame them for not knowing," he said ruefully. Ariel was more encouraged by his interviews with fellow undocumented students: "The greatest thing is that despite all the challenges these individuals have faced, there is still hope that things will get better."

In the posters, Ariel counters common myths and misperceptions with statistics and facts. He uses a marbling technique, where pigment is dropped into a medium and combed to create patterns, as a metaphor for the undocumented experience in America.

"I felt that was an accurate portrait of immigration in the U.S. It may not feel like it fits, but it's beautiful when it comes together," he said.

Things are looking up for Ariel. He recently obtained a work permit through the Deferred Action for Childhood Arrivals (DACA) policy, which allows him to "live here with some dignity." He also had the honor of being selected to speak at the commencement ceremony for the J. William Fulbright College of Arts and Sciences. Next stop: Ariel will study communication with an emphasis on film studies here at the U of A.

Visit Ariel's website to see more of his design work.