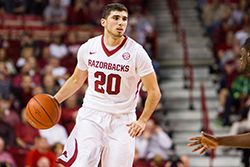 The screech of his teammates’ rubber sneakers on the court. The swoosh of a basketball well placed in the net. The hum of the charter bus barreling down the highway after a successful game--- These are the sounds of victory for Bodenhamer Fellow and Razorback basketball player Kikko Haydar, but the hard work doesn’t end with the final buzzer.

Kikko balances books and basketball for the love of the game, but his action-packed schedule is preparing him well for his future career in medicine. A typical Friday for the junior kinesiology major starts with team conditioning exercises from 6 – 8 a.m. followed by a full slate of classes before lunch. During basketball season, afternoon practice begins at 2 p.m. and runs late into the evening, leaving just enough time for homework before bed. This semester he is enrolled in several tough classes, including University Physics I, Mechanics of Human Movement, and Arabic.

Kikko is the son of two University of Arkansas Middle Eastern Studies professors, Adnan and Paula Haydar, and has recently begun taking Arabic classes himself.. Though he is a fluent Arabic speaker and often uses the language at home, reading and writing are a different story.

“I grew up speaking Arabic with my parents and other kids in Lebanon, but there are two sides to the language. I had no idea that there was a formal version of the language, until now, and it has been nearly impossible to turn off the colloquial version in my head to learn the finer points of Arabic grammar.

Having lived abroad in Lebanon with his family before college, Kikko feels just as comfortable there as he does in the United States. “Going to Lebanon is like going from home to home. There’s no culture shock for me,” he said. Kikko hopes to pursue medical school after college, perhaps at the American University of Beirut in Lebanon, where his father studied.

“My father is Dr. Haydar, my two brothers are Dr. Haydars, my mother will soon be Dr. Haydar. I have 50 cousins living in Argentina that are Dr. Haydars. I would love to follow in the family tradition with my own Ph.D.,” Kikko said.

The focus and energy that Kikko shows on the basketball court will certainly help him in his intended field, emergency room medicine. “My middle brother is an ER doctor, and I got to do a shift with him a couple of summers ago. That sort of work is what I’m really interested in. It was crazy and hectic, with a lot of adrenaline – I would never get bored.