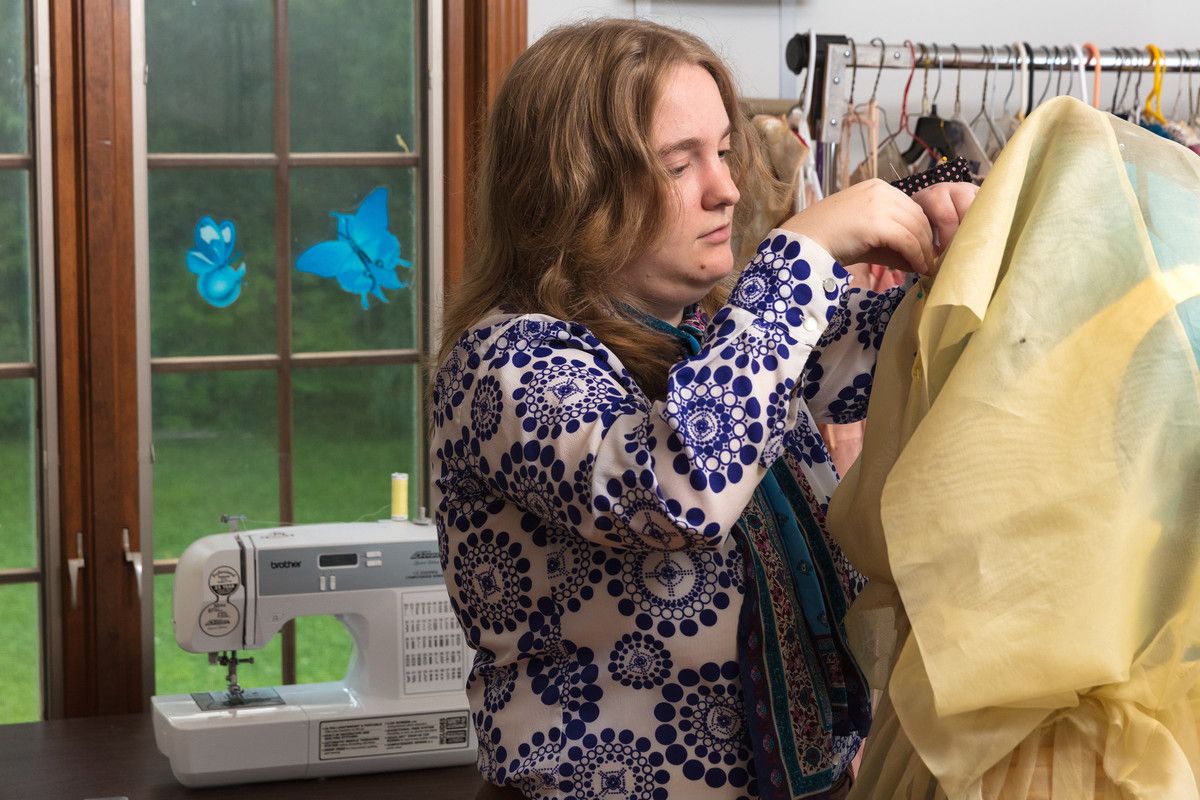 Whether you’re a fan of Tolkien’s Middle Earth or have simply absorbed the cultural references it spawned (my precious…) you likely have a strong mental image of Tolkien’s characters. Galadriel, for example: Cate Blanchett, clad in white and silver, with flowing sleeves and Y-shaped fabric sash. Given the popularity of Peter Jackson’s film trilogy, that’s completely to be expected. But it’s also a problem, says Elkins native Grace Costello, who graduated in December 2018 with a degree in costume design from the Apparel Merchandising and Product Development program in the School of Human Environmental Sciences.

“It’s all incredibly Eurocentric,” Costello explained. Because of Tolkien’s heavy influence in the fantasy genre, “these fashions have entered into the collective subconscious, especially after the Peter Jackson films.”

Costello said, “By changing the way we costume these people, we can change the way we see heroes in the collective subconscious.”

Costello focused on the Elven patterns of dress just before the creation of the Silmarils in the First Age, thousands of years before the events of The Lord of the Rings take place, when the High Elves are living in Valinor on Aman, a continent to the west of Middle Earth, across the sea. This point in time, Costello said, is “the peak of Elvish art and culture. The Elves have developed art and technology to this fantastic point, and they’re teetering on the brink of the darkening of Valinor, when, with the effects of war, migration and changing identity, fashion could go anywhere.”

Their interpretations led to the creation of two half-sized outfits, one for a male metalsmith and one for a female scholar. Importantly, the primary differences in the two designs rest not in gender but in their use and purpose, and, since the Noldor were a tribe of craftsmanship and practicality, the designs center around functionality. Both pieces are highly modular, for example, with overskirts or mantles that can be added or taken away to make the outfits more formal or more suitable to working.

For their designs, Costello used reds, blues, purples, silvers and golds, in fabrics including linen, silk velvet, silk charmeuse, silk chiffon, silk dupioni, and wool-silk blend brocade. “Silk is scarce in our world because it has to be imported from Asia,” Costello explained. “But silk is not scarce in Valinor – I don’t see any reason it would be. The climate would have been perfect for silk.”

And climate played a large role in Costello’s designs. The climate and geography of Cuiviénen, the birthplace of the Elves in northeastern Middle Earth, would have likely resembled the Uralic region of Europe, so Costello drew primarily from historical Finnish and Uralic dress when creating their initial patterns. The metalsmith’s tunic, for example, is a more traditional piece based on Khanty designs, sewn from rectangular and triangular pieces of fabric.

But this environment is wholly different from the environment the Elves discovered in Valinor, which would have been significantly more temperate, with plentiful resources.  “That’s where I got to let my imagination run wild,” Costello said. They were able to build upon this established fashion history to create something different. Even so, they said, “I wish I would have pushed it to be more alien,” by using techniques like weaving in the round, or by creating styles never-before-seen in the fashion world.

“What I don’t want is for this project to be a definitive guide to what elves wear,” they said. “Because it’s not. This is using my knowledge base, my own personal and aesthetic taste, and my background. All my education is overwhelmingly in European fashion history. I’d love to see other people from other cultural backgrounds make their own interpretations. I’d like to see a wider range of influences in mainstream media depictions and in academia, in Tolkien studies.”