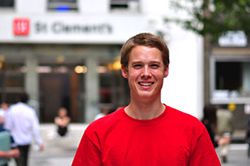 Mike Norton, an honors ag economics and poultry science double major, has studied and worked around the world, but ultimately hopes to make a difference right here at home. Mike’s first trip abroad was inspired by a non-profit organization that provides microfinance loans to farmers across the globe, presented during a class lecture. Mike wanted to pursue opportunities with a similar international focus, and began meeting with agricultural economics professor Dr. Lanier Nalley, who had worked with the World Cocoa Foundation in the past.

As a result of their collaboration, Mike spent the summer gathering data as an intern for the organization’s Cocoa Livelihoods Program. “We worked with about 200 farmers all across southern Ghana and now we’re taking that data and running some deep econometric projections that even I don’t fully understand, but I’m learning,” said Mike. “The point is to basically take the impact of that training and understand the gain. We’re trying to show that the program is worth the money, that each dollar invested is yielding much more than the dollar itself.” He has since transformed the project into a longer study of the impact of microfinance loans on cocoa production for his honors thesis.

Mike’s summer in Ghana also brought fresh perspective to his future plans. “I had considered joining the Peace Corps, but I now know I that if I want to work for an NGO or in any global development position I would be fine working abroad for a brief advising stint, but not long term,” said Mike. “Without that internship I wouldn’t have known that, and it really helped me recalibrate what I was doing. I got a clear idea of what research looks like in the real world and how we can then take that and funnel it back into education and policy. It’s a continuous cycle between industry and research and I got to see it from both perspectives.”

Mike was named a Truman Scholar in 2012, the 16th student from the U of A to win this prestigious honor since 1978, and was more recently selected for the Presidential Fellows Program. As a fellow, Mike got the chance to study the U.S. Presidency and public policy up close during two three-day workshops in Washington D.C. He plans to pursue job opportunities in Washington, D.C. after graduation and eventually hopes to run for political office in the state of Arkansas.

Learn more about Mike's experience in his video profile on Arkansas Short Takes.