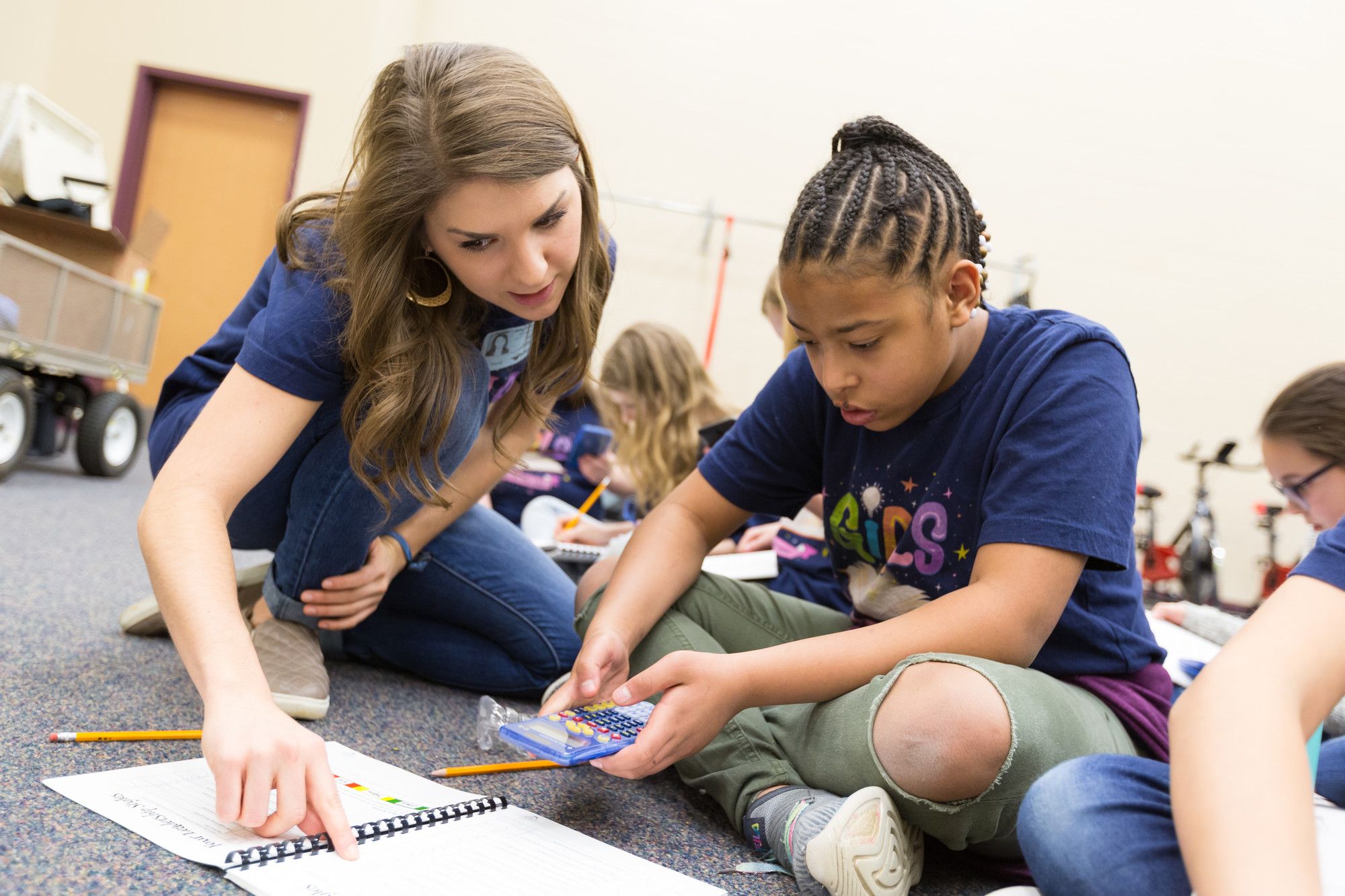 Close to 40 fifth-grade girls are getting their ya-yas out as they try to maneuver an Oreo from forehead to open mouth – no hands allowed. The exercise invokes chaos, and more than a few cookies crushed underfoot, but the girls are quick to settle into a large circle anchored by Sophia Vincent, an honors education senior who easily commands the room.

Today is the last in a series of after-school sessions designed to build leadership skills in McNair Middle School girls, and the theme is “strength.” Vincent asks the students to share things they’re good at: “Math!” one girl volunteers, while others claim writing, gymnastics, and crafts.

“Are we all good at everything?” Vincent asks.
“No!” the girls chorus.

Vincent continues to hold their rapt attention as she reads Red: A Crayon’s Story, a simple fable about a red crayon that draws blue – and finds its niche by embracing its singularity.

It’s a simple concept, but an important one for these girls headed into the Sturm und Drang of adolescence.

“They’re trying to figure out their identity, figure out their place in their circle of friends, their school, their community,” Vincent said. “I wanted to focus on empowering girls at that age, and help them get a broader take on leadership, that it’s not just the one at the top of the social pyramid.”

The idea sprang from Girls Academy, a one-and-one-half-day empowerment program offered by Vincent’s sorority, Kappa Kappa Gamma. She led the outreach program for two years, and “I just saw such a need in that stage of development.”

For her honors thesis Vincent developed a five-week literacy-based mentoring program. She selected five aspects of leadership – growth mindset, integrity, resilience, love and loyalty, and strength – that together make up the acronym GIRLS. Each week the students would explore a theme as a large group, then break into small groups led by Kappa mentors. There, they completed activities in a journal that Vincent developed and crafted items to take home.

“The small groups are where they spent most of their time – one-and-a-half hours,” Vincent said. “McNair has over 700 students in the 5th and 6th grades, so these small groups helped them get to know other girls their age.” The students completed self-reflections – what they’d learned and how they would apply it in their own lives – before reuniting with the entire group to feast on a dinner of kid-friendly pizza, chicken or tacos.

It’s a fully packed three hours, and most would be in need of some serious nap time afterwards.  But Vincent would go home to plan the next session, often retooling based on what she’d learned that day. In the first semester, for example, when working with the sixth-grade girls, “I discovered that they were big into theater, so I redid the lesson plan for the next week. A lot of girls came out of their shells after that.”

Faculty mentor Angela Elsass, a clinical associate professor in the K-6 Teacher Preparation Program, specializes in adolescent education. She reviewed lesson plans and attended each session but emphasized that the curriculum and materials were Vincent’s own. “Sophia developed the entire program herself, from the whole-group exercises to the workbooks, T-shirts and small mentor groups led by Kappas,” she said. “It’s a well-organized program, and the girls love her.”

To assess impact, Vincent administered pre- and post-program surveys to the students and their parents, coded and analyzed the girls’ weekly self-reflections, and also considered observations and notes offered by her Kappa mentors. It’s a lot of number crunching: “I’m in the process of writing it up – basically the data does show that the program had a positive impact,” Vincent said. “The hard part is those moments when I see something in the girls that’s hard to measure.”

For example, at the first meeting the fifth-graders were timid and huddled in small groups with old friends. By the fifth week, “they walked in and they all sat down in a big circle, with no prompting from us. And when I asked, ‘how many of you made a new friend,’ every single hand shot up,” Vincent recalled with pride. “That tells you a lot, and that’s not something I can measure with statistics.”