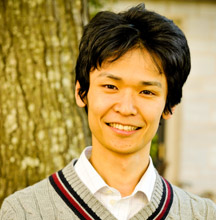 Honors student Akihiro Eguchi wants to design a kinder, gentler robot. Inspired by Astro Boy, the robot manga hero from the 50s who was wildly popular in Akihiro’s native Japan, or AIBO, a robotic pet capable of learning, he’d like to program a robot that could keep a child company until his parents come home – and get a few household chores accomplished as well. “In America, robots tend to be martial, like Terminator. In Japan, if a robot has a mind, he can be a good friend,” Akihiro said. To achieve his dream of programming artificial intelligence, Akihiro is putting in extra credit hours to earn a double major in computer science and psychology. He began by working with engineering professor Craig Thompson to develop “smart objects” in Second Life, an online virtual environment. “In the virtual world, it’s a difficult task for the computer to tell the difference between a desk and a chair,” Akihiro said. “We identified each object with an RFID tag so that the computer could recognize it easily.” In the real world, this technology would allow a user lounging on the couch to change the channel, adjust the temperature in the room, and send an email – all by pointing a smart phone at the television. With support from an Honors College research travel grant supplemented by funding from Professor Thompson, Akihiro presented this research at a computer engineering conference in Freiburg, Germany.

While Akihiro welcomes the ease and economy of designing in Second Life, he is ready to design real world applications using programming languages such as Java, C#, and LISP. In his senior capstone engineering course, he is working with two other students to develop an autonomous floor-mopping robot that can figure out the most efficient mopping route, identify objects it encounters and perform other household tasks, as well. He’s also preparing to tackle knottier problems in artificial intelligence by studying how babies acquire language under the direction of Douglas Behrend, chair of the psychology department. The first step involves distinguishing between nature and nurture. “Innate knowledge is easier for programmers because they can simply enter data,” Akihiro said. “But learned behavior, this is more difficult. We have to find a good mechanism for that.”