Most of us only think about teeth when something’s wrong with them—when they come in crooked, break or begin to rot. But take a minute to consider teeth as the extraordinary feat of engineering they are.

They concentrate and transmit the forces needed to break food, again and again, up to millions of times over a lifetime. And they do it without themselves being broken in the process—with the very same raw materials used to make the plants and animals being eaten. Chewing is like a perpetual death match in the mouth, with plants and animals developing tough or hard tissues for protection, and teeth evolving ways to sharpen or strengthen themselves to overcome those defenses. The variety of tooth types, especially across the mammals, is extraordinary.

It’s a testament to what evolution can accomplish given time, motive, and opportunity. Lots of animals have “teeth.” Sea urchins, spiders and slugs all have hardened tissues used for food acquisition and processing, but real teeth, like yours and mine, are special. They first appeared half a billion years ago, and Nature has spent the whole time since tinkering with ways to make them better. It’s a story written in stone—the fossil record.

TEETH:  EVOLUTION’S BITE is broken into three parts. The first part introduces key terms and concepts:  tooth form, structure, and development, food and feeding. The second part focuses on the evolution of teeth and, in a broader sense, the animals in whose mouths they evolve. We cover teeth before the mammals, the origins of chewing, and the mammalian fossil record. And the third part presents the teeth of mammals today in all their glory – an amazing example of Darwin’s “endless forms most beautiful and most wonderful.” The course closes with a consideration of our teeth. Smile and look in a mirror. Millions of us suffer fillings, crowns, wisdom tooth extractions, and braces each year. Most other mammals don’t have widespread dental disease and orthodontic disorders. Why are we so different? The answer is rooted in evolutionary history; and this course offers the student the perspective needed to understand this and, in doing so, to better appreciate our place in Nature. 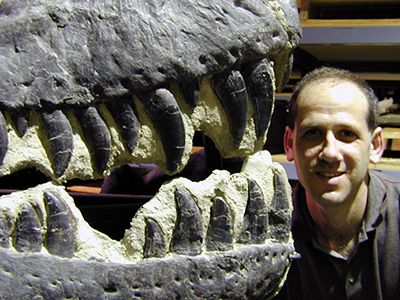 Peter Ungar received his Ph.D. in Anthropological Sciences from Stony Brook University and taught Gross Anatomy in the medical schools at Johns Hopkins and Duke before moving to the University of Arkansas, where he now serves as Distinguished Professor and Chairman of the Department of Anthropology. He is also Director the university’s Environmental Dynamics Program and an Honorary Professorial Research Fellow of the Evolutionary Studies Institute at the University of the Witwatersrand in Johannesburg, South Africa. Ungar is a Fellow of the American Association for the Advancement of Science, the Johns Hopkins Society of Scholars, and the University of Arkansas Teaching Academy.

He is known primarily for his work on the role of diet in human evolution. He has spent thousands of hours observing wild apes and other primates in the forests of Latin America and Southeast Asia, studied fossils from Tyrannosaurus to Neandertals, and developed new techniques for using surface analysis technologies to tease information about diet from tooth shape and patterns of use wear. This research has been funded by more than $2 million in grant support.

Ungar has written or coauthored more than 150 scientific papers on ecology and evolution for books and journals including Science, Nature, Proceedings of the National Academy of Sciences, and Philosophical Transactions of the Royal Society. These have focused on teeth, food choices and feeding in living primates, and the role of diet in the evolution of human ancestors and other fossil species. He has also edited or co-edited edited three volumes focusing on the evolution of human diet, and his academic book, Mammal Teeth: Origin, Evolution, and Diversity (Johns Hopkins University Press), won the PROSE Award from the Association of American Publishers for best book in the biological sciences. His latest book is a popular science work entitled Teeth:  A Very Short Introduction (Oxford University Press). His upcoming title, “Evolution’s Bite” (Princeton University Press), is slated to hit bookstore shelves in 2017.

Ungar’s work has been featured in documentaries on the Discovery Channel, the Science Channel, BBC Television and others. He has given dozens of invited talks and keynote addresses at venues around the world, including the Royal Society in London, the Smithsonian in Washington, DC., and the American Museum of Natural History in New York.

Ungar has published several papers with his honors students, including some with the student listed as first author. Visit the Ungar Lab website to learn about current research projects.